Travelling with a Carry-On Stroller? 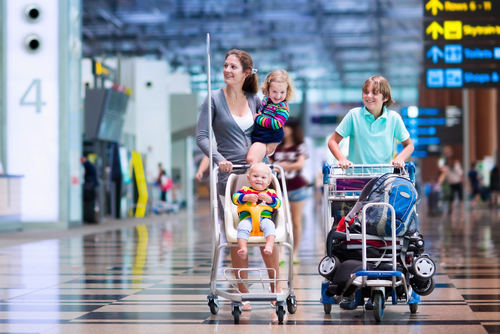 When we took our first flight with a baby, the smallest pram available was a Bugaboo Bee – I struggled to find a bag to pack it in, and then had to worry about where to store it in our tiny hotel room.

I make no secret of my love for my Babyzen Yoyo – which was the first compact pram to market. Since then, some wonderful prams like the Mountain Buggy Nano, Redsbaby Skip, GB Pockit, Baby Jogger Tour and countless others have come out great carry-on sized prams which have made traveling with young children super easy.

But now the rules have changed!

With the news this week that both Qantas and Virgin Australia are going to start weighing and measuring all domestic carry-on luggage, it is important to know which carry-on prams you can take with you. These rules are applying to domestic flights only, and at this stage international travel seems to not be impacted.

So what are the rules?

Each airline has specific rules that must be followed – not only for the size of each suitcase, but also allowances for infants or children. A carry-on sized pram counts towards your luggage allowance, so in some cases, if you have a Yoyo pram with you, you will only be allowed to take an additional 1kg of carry-on luggage with you for the flight!

It is really important to check your ticket, however here are some summary rules:

On most fares, you are restricted to a 7kg maximum per person. Jetstar does allow you to buy an additional 3kg of carry-on luggage, which may be enough to get you over the line. You can also take an approved car seat on board with you for any child with their own seat.  Jetstar does not provide for any additional carry-on luggage for infants, so if you are travelling solo with a lap baby, you will have a total of 7kgs carry-on for you and your baby!

On most fares, you are restricted to 7kg maximum per person. You can also take an approved car seat on board with you for any child with their own seat. If you are travelling with an infant, you will have an additional 7kg allowance for “baby items”, which is great news if you’re trying to get a carry-on stroller on board as well!

Your carry-on pram must be placed within its bag, and collapse smaller than 48 x 34 x 23 cms and smaller than 105cms

On most fares, you are restricted to 2 x 7kg bags per person. Once again, approved car seats are allowed on Qantas. While infants do not have any baggage allowances, you can take nappies and food in addition to the adult’s carry-on luggage limit.

Your carry-on pram does not need to be in its bag, but must be smaller than 115cms  – provided your other carry-on is a ‘soft’ bag (like a backpack or nappy bag).

On most fares, you are restricted to a total of 7kgs of carry-on per person. There is no specific additional allowance for travel with infants.

Your carry-on pram should be in its bag, but must be smaller than 115cms. You can take an additional bag, but your total carry-on must weigh less than 7kgs.

Any of the regional planes (generally with propellors) have much smaller carry-on allowances, which generally means that if you have a carry-on sized pram, you will need to leave it at the foot on the aircraft to be placed under the plane during the flight. Generally, car seats are not allowed on board.  Please check your individual airline for further details.

Which pram can I take?

We’ve prepared this handy chart to help you navigate the various airline options. This is not to say the pram won’t be allowed, however the airline does have the right to refuse you to take it onboard. Please check the chart carefully before flying this Christmas season! 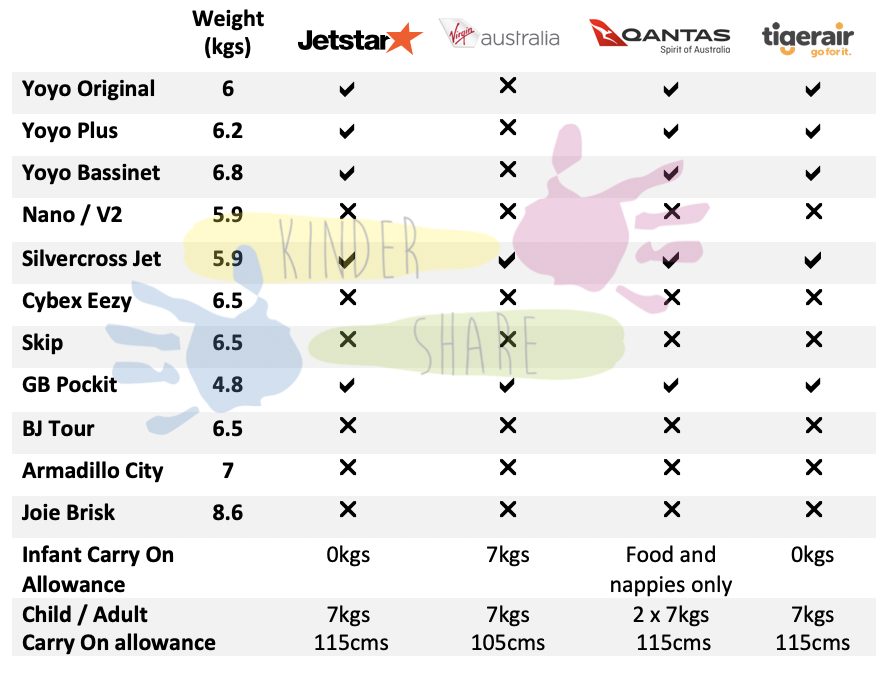 What do I do if my pram is too big?

While the rules have just been announced, there are inconsistent reports of enforcement around Australia. This means that you could be OK taking your usual stroller, but as the Scouts say – you should Be Prepared.

We recommend packing your bag into a specialist pram bag to help protect it through luggage services. Kindershare have a range to rent here. You can also have a look at renting a smaller pram to take with you, or a full  full-sized pram once you arrive here. 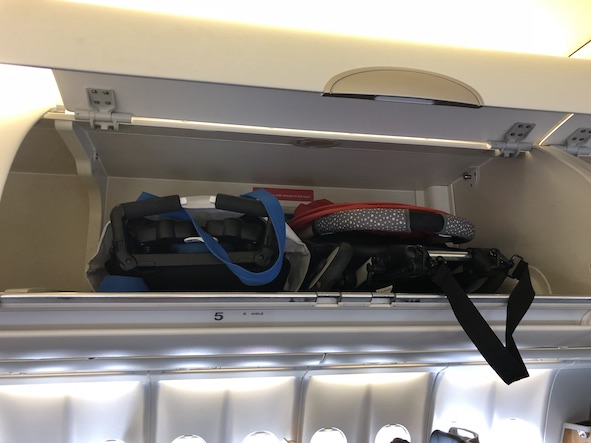